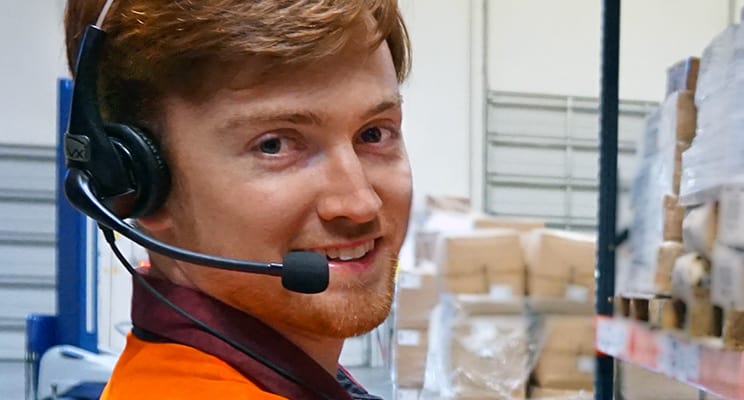 What is a Warehouse Voice Picking System?

Depending on the business, order picking may be implemented with paper order tickets or with mobile devices that deliver electronic picking information from a software application, such as a warehouse management system (WMS), to the workforce on the distribution floor. Organizations that are using a warehouse management system typically customize the WMS have or built in-house solutions to manage their unique products, inventory, and delivery options. Barcode scanning may also be used as an integrated technology on mobile devices, or through a separate scanner. Barcode scanning allows for fast, accurate capture of unique item information used to manage inventory, order fulfillment, and order returns.

Voice-directed picking guides the worker through the picking process with spoken commands and verbal responses from the user. The system to manage the workflow of voiced commands from the WMS and integrate the user's spoken responses is called voice automation. Voice-directed picking uses software technology to translate textual information to speech, which is heard by the user, typically through an industrial-grade headset designed to operate in noisy environments such as a warehouse. The voice directed picking process, running on the mobile device, allows the warehouse worker to hear guided commands and speak responses. Voice directed picking at its core is process automation using specialized software which is optimized to manage the workflow and incorporate voice I/O.

What Does a Voice Order Picker Do?

Workers are prompted during the directed workflow and respond verbally. The ability to translate the textual information on the mobile device into audible commands or information is called text-to-speech. Workers respond with verbal responses during the execution of the picking process. The ability of the system to translate these verbal commands into data input for the workflow is called speech-to-text. Voice recognition is another term used for the automated process of translating spoken words into appropriate data that is input into the system.

The voice order picker follows the order picking process with verbal commands and spoken responses, executing the workflow as the system directs them for a particular order. The pickers follow the sequence of the order picking process using voice directed commands they hear combined with responses they speak, such as confirmation of the number of items picked. The voice order picker may pick several items from different parts of the warehouse and deliver the final completed pick to a shipment location or a pack and ship location. Depending on the picking methodology in place, with approaches such as cluster picking, for instance, the picker might be instructed to pick several orders at the same time for different customers before delivering all the orders to a final ship or pack and ship location in the warehouse.

Voice picking today uses advanced voice recognition algorithms to deliver text-to-speech and speech-to-text for the most popular languages spoken by the warehousing staff, including languages such as Spanish, French, Italian, Japanese, Chinese, German, English language variants, Thai, Greek, and many more. In addition, it is also possible to tailor a system to handle unique language combinations that may have arisen in a mixed language environment. Multiple languages can be supported on a single device and multiple languages can be in use on the warehouse floor at the same time.

What are the Benefits of a Voice Picking System?

Since workers are listening rather than viewing instructions, their hands and eyes are free to focus on other parts of the picking process such as navigating the warehouse, driving forklifts, and physically selecting the product from their locations in the warehouse. This improves the experience for the workforce, allowing them to move through the process quickly and efficiently. Voice picking has a proven track record of improving process productivity of 20%-50% on average. This is true for each process voice automated. The workforce is also safer since they are now focusing more on the tasks they are performing, rather than looking at a device or paper to see where they are in the process.

Another benefit of adding voice to the picking process is that order accuracy is increased. The cost of picking errors is high. Delivering the incorrect product is costly and impacts customer satisfaction. In today's competitive environment maintaining high customer satisfaction is typically a key business goal, and accurate as well as timely orders are important to meeting this promise. Since workers are not typing on a keypad to input information such as quantity picked, accuracy increases. Process elements can also be automated, further ensuring data input accuracy.

Mobile voice solutions today can also automate repetitive sequences, transfer data from one field to another, transfer data from one application to another, essentially digitizing a previously manual process. Automating processes and integrating with existing systems has never been easier than with a modern mobile voice solution. Automation with voice streamlines and further optimizes existing picking processes.

One of the biggest benefits of voice for the picking process is the reduction in training time for new pickers. A time savings of 50% compared to without voice guidance and with greater ease and accuracy for the new staff.

What is Voice-Directed Warehousing?

The term voice picking is popular and well known, and with recent technology advances, it is also possible to use voice automation with other processes in the distribution center. Any process can be voice automated today. This is also referred to as voice-directed warehousing or VDW. The term VDW is used to encompass voice-directed work for any process and includes all types of picking as well as other processes that are part of managing orders, such as replenishment, receiving, put-away, cycle-count, shipping, and more. Voice automation can be used inside and outside the four walls of the warehouse.

How has Pick by Voice Technology Evolved?

Voice technology can now be deployed entirely on the mobile devices used in the warehouse. In the past, voice picking systems required a voice server, and early voice technology solutions required that individuals record voice samples that the system used to recognize commands. This is no longer true today. There is no need for individuals to record voice samples any longer. The older voice technology uses what is called user-dependent speaker recognition. Current or modern voice technology uses user-independent speaker recognition and there are no voice files recorded or stored and there is no longer any need for a voice server.

Specialized automation designed to knit together voice input/output with automation is now available and optimized for popular mobile operating systems such as Android. Users have a variety of options available for voice-capable devices, including ruggedized industrial tablets, consumer-grade tablets as well as popular industrial mobile devices.

Voice picking workflows, running on the mobile device, can seamlessly incorporate scanning with an integrated scanner on the mobile device or with an additional handheld or ring scanner. HUD or heads-up display glasses can also be incorporated into the workflow very easily with modern mobile voice. With the HUD units, information can be presented visually on a small screen in the user's field of view, reinforcing commands and providing additional visual information for the worker. The heads-up display presentation is especially compelling for helping new staff get up to speed very rapidly with a new process.

How Easily can Voice be Integrated with Other Systems?

Modern voice technology can be easily integrated with other systems. No two companies, even companies in the same industry, even companies using the same WMS solution, will have the same processes. One of the important benefits of current mobile-based voice solutions is the flexibility and the ease of automating each client's unique processes. The technology is flexible and built to industry standards, and as a result, provides a rapid application development environment and ease of integration with other systems.

What does a Voice Picking Systems Cost?

Is voice picking expensive? The typical return on investment for modern, mobile voice picking software is under twelve months, and this period of twelve months is measured starting from the date of the initial proof-of-concept. The total implementation time is typically four to six weeks. For instance, in approximately a month and a half, one of your picking processes could be voice automated and you will begin to see improvements in accuracy, productivity, and new hire ramp-to-rate nearly immediately. This return on investment is based on voice automating a single process, such as voice picking for case picking, for instance. Each additional process (receiving, put-away, cycle-count, shipping, etc.) that is voice automated will deliver improvements in productivity as well as reduced errors and faster ramp-up for new staff. If new mobile devices are also purchased, the typical payback period is approximately eighteen months, and incorporating modern mobile voice with a move from WinCE to Android is also a popular option.

Can You Use Voice Picking with a Cloud-Based WMS?

Yes, with voice technology that runs entirely on the mobile device. "Voice on the Edge" is another way of referring to this technology since modern mobile voice is deployed entirely on mobile devices in the DC. For WMS solutions moving to cloud models, voice automation with a modern, mobile solution, will deliver the same positive results.

Voice for picking or any other process in the warehouse is an attractive option for boosting the systems and processes already in place. Voice directed picking and voice-directed warehousing using modern mobile voice can decrease the impact of the labor shortage and increase process productivity while improving the safety and satisfaction of the warehouse staff.