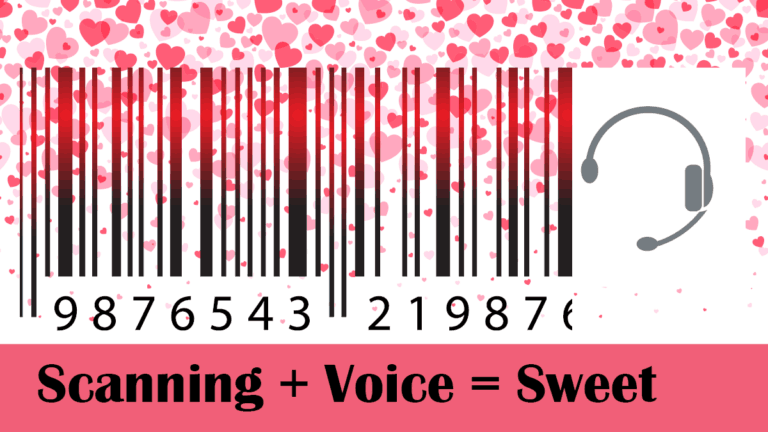 Scanning or Voice? – Use Both

It’s not Scanning OR Voice...
it’s Scanning AND Voice!

For the past decade, companies that manufacture, inventory and deliver products have been researching, testing and deploying solutions that can increase productivity, eliminate errors and provide smoother, more manageable operational workflows. Additionally, omnichannel requirements and advances in approaches to supply chain management have permeated the industry and driven organizations to work harder to find an edge over their competition.

The barcode to visually represent data read by a machine, began to be widely used in the early 1970’s when George Laurer’s vertical bar design was embraced by the grocery industry. Inventory management benefited greatly from this new technology which combined barcode scanning devices with unique, printed barcode labels for items and the emergence of the Uniform Product Code, which is now a global standard used by many industries for the management of goods.

Speech recognition software in the distribution center became commercially available and deployed in the early 1990’s – and it was designed and deployed for the picking application only and was initially viewed as the next evolution in warehouse efficiency, moving from paper to RF Scanning and on to voice directed warehousing was touted as the ideal path. In this early voice-directed world, when embracing voice in the warehouse, pickers used voice for the entire process. In this old-style voice scenario, the picker receives instructions and responds verbally to the system, including the product information. For the barcoded product information, the picker is required to either speak the entire barcode one digit at a time (typically 12 numbers) or a portion of the barcode (4-6 numbers) to the system while picking orders.

In this 1990’s timeframe for voice-directed technologies, voice picking worked only with specific warehouse management systems and only on proprietary hardware which supported only voice and was very expensive.

My how things have changed.

We recently rang in a new decade of 2020 and you may be thinking, the 70’s and the 90’s, that’s ancient history, everyone knows that you can add voice and still use scanners in your operations! Well, you’d be surprised how often we come across references to outdated information. Take this blog post from 2018.

There are still pockets of people who are convinced that the two technologies are incompatible. This is patently untrue; in fact, when used in combination, the list of benefits is not only long, but impressive on multiple levels.

The Benefits of Voice Automated Workflows with Barcode Scanning

Companies that have made the investment in scanners have done so at a price point that is significant. These devices can range from hundreds of dollars to thousands. They are ruggedized, feature rich and present a mobile platform that is powerful, adaptable and long lasting. That investment also included printers and the supplies needed to use them. By adding a voice interface to these powerful mobile computers, it not only extends the useful life of the technology providing a more reasonable ROI from just a hardware perspective, but it also exploits the feature richness and overall functionality that these devices have. Voice as the primary data collection method and device controller allows for additional economic metrics of increased productivity, error reduction and user safety. And the benefits don’t end there, they can be extended into WMS applications as well, without the need to integrate with middleware or lengthy engineering services.

Evolution of Scanning or Voice

When older, server-based voice picking applications were initially introduced the technology and software applications available were nascent compared to what is available today. Amazon and many other market driving forces had not even been imagined; so, when WMS vendors introduced voice technology, people took a long hard look, even though it did not allow for the use of barcode scanners as part of the process. As the market matured, many companies found that optimizing their workflows through internal development combined with barcode scanning made for a more cost effective, workflow-centric solution that could be maintained much more cost effectively and continuously improved upon internally, and was not dependent on costly professional services. Scanning became much more prevalent and powerful in the warehouse.

As voice interfaces matured and scanning devices became more powerful, a new, more flexible solution began to emerge – voice AND scanning. As the majority of companies had decided to develop their internal applications to conform with predetermined, highly optimized workflows specifically designed for their environments, these same companies started to explore how a voice interface could make these applications hands free and eyes free, all the while continuing to improve the speed and accuracy of their warehouse workers.

While the legacy voice companies continued to sell server-based single application voice offering, AccuSpeechMobile introduced device based voice – complete with an agile development environment, support for multiple operating systems and application types (Terminal Emulation, .NET, Web, and others) as well as supporting all major brands of barcode scanners. This allowed customers of all sizes and types to reevaluate the use of voice in their operations now, to improve productivity with what they already have in place.

As customers began to utilize the device based tools, it became immediately apparent that the device-based voice interface could not only integrate with any application, but it also could automate repetitive processes so the workers did not have to execute the same repetitive actions, keystrokes or hardware function keys. The agile development allowed workflow sequences to be added to a voice command, for instance, instead of filling in the last quantity of a pick sequence, hitting a couple of function keys, a return key and then opening another session, AccuSpeechMobile only requires the user to say “Pick Complete”, all those keystrokes and additional repetitive actions are executed automatically, saving time and ensuring the correct keystrokes and optimized their sequence. Robotic Process Automation (RPA) capability was then utilized throughout multiple applications, with the customers developing additional voice automated workflows exploiting RPA’s like shipping, receiving, replenishment, anywhere this strategic technology made sense.

Voice and scanning are a strong combination for organizations to continuously improve their applications and offer a cost-effective way to utilize their handhelds more powerfully and for longer periods of time. Integrating RPA technology provides an even more powerful set of tools for faster training, optimized workflows and increased productivity and accuracy.

Scanning AND Voice, with RPA integration. That is where our customers are headed, are you?