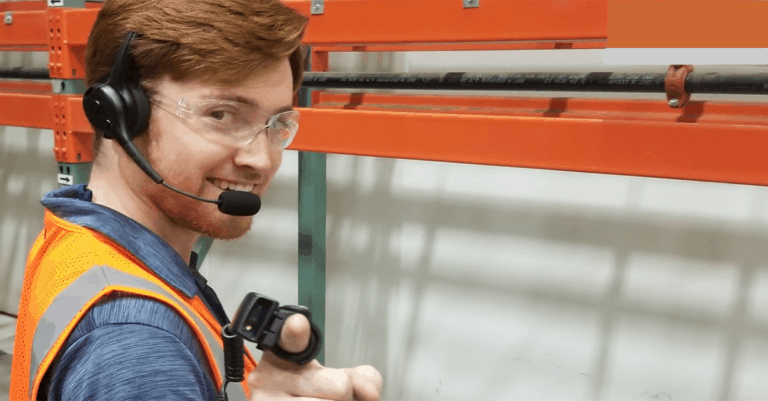 Voice Picking Then and Now

The Evolution of Voice in the DC

Voice picking became popular in the 2000’s as a paperless, hands-free, and eyes-free option, sending warehouse operators to pick locations and verbally instructing them in picking tasks. The early, server-based voice solutions provided the identical picking application to each customer – regardless of their industry. While early server-based voice applications did provide benefits, the inflexibility of the application, costly integration and prohibitively high maintenance meant that the voice solution had very limited scope as to the types of companies that a) could afford to install it and b) had the longer time horizon to realize ROI for the investment.

Modern voice picking technology is deployed on the mobile device rather than the server. It is agile in its development and used throughout the warehouse on all kinds of applications. The operational benefits include hands-free data collection and eyes-free productivity and safety benefits – but they also include much more. If you’re only familiar with legacy voice solutions, then here are some things to keep in mind regarding the old vs. the new voice picking technology.

Old - Each operator was required to have a proprietary voice-picking headset + microphone, and a voice-dedicated terminal. If management wanted barcode scanning for increased efficiency, they would need an additional device.

New - Voice technology is device based – and can be used on intelligent bar code scanners. This allows for one device with no need to ever look down. It also has the capability to preconfigure keystrokes in combination with collecting data with a single voice command – a huge difference in capability adding automation to the mix.

Old - All orders were imported from your WMS and were translated onto a voice server, then resent over the network, allowing for a single point of failure for the entire workforce.

New - All orders come direct from the WMS to the handheld device. This provides fast input with no single point of failure for voice picking.

Old - When the voice-picking system directs a user to a location, as part of the legacy voice process - they must provide check digits, taking up to 10 seconds to ensure location and product piece. This also becomes a quite tedious process for the people using the system.

New - The operator scans the barcode at the location in less than a tenth of a second. This gains up to 9.5 seconds for every location scan and every bin scan versus a 4 to 5 second delay for speaking of check digits. Voice commands are more natural and avoid the annoying repetitive nature for the people using the system.

Old - Many legacy voice-picking systems can’t integrate with your existing warehousing system. If the integration module doesn’t exist, or if you have an in-house WMS, these server-based systems cannot be installed.

New - The modern voice picking system is WMS agnostic, residing on the device. With no need for server integration, any WMS – commercial or home-grown - can send instructions to a voice enabled bar code scanner.

Old - Voice was just used for picking, the server and its integration were specific to this one task, as it had the highest density for usage.

New - Modern voice automation can be used for any application running from the WMW/ERP system (local or cloud) deployed on the intelligent barcode scanner, increasing capability and ensuring a fast ROI.

Old - The Voice Picking project took a long to implement … often up to 12 months.

New - Voice can be deployed in production for an optimized picking application in less than 3 months at a cost that is a fraction of original voice picking server software, hardware and integration costs. Plus, it can be added to your existing optimized operations - not a rip out and replace scenario!

Old - Legacy voice picking solutions require that each individual “voice train” the system which can take weeks to ensure that voice files for every user are recorded. In addition, the voice training files are stored on the server and can degrade with age and usage and must be recreated periodically.

New - Voice automated workflows now employ state-of-the-art user independent voice recognition, which never requiring training. It is simpler to add new users, faster to get them on the floor and easy to upgrade from an older OS to a newer one. And, they are more accurate than the older, user dependent server file designed recognizers.

Old - Proprietary devices (with a proprietary OS) were the only units that could connect to the voice picking server.

Old - Server based voice picking presents a single point of failure for the entire warehouse. If the picking server goes down, people can’t pick.

New - Modern voice picking is distributed technology that resides on mobile devices. There is no single point of failure and your pickers are always working.

Voice Picking has always been a process that makes sense in a warehouse with high density for picks, omnichannel fulfillment and accurate delivery of products, yet with modern voice solutions, adding voice across multiple applications is commonplace. The companies that chose not to adopt the legacy voice solutions can now revisit voice as a technology to optimize their existing workflows. In today’s modern distribution centers, you may choose to add voice automation to existing handheld devices and use voice in conjunction with barcode scanners, adding voice to generate even greater levels of productivity from applications that have been optimized over time, with a typical ROI of under a year. Modern voice solutions allow organizations to extend the process of continuous improvement through the agile development, staged deployment and applicability to multiple workflows. Is it your time now?